The authorities in the Turkish city of Osmaniye have closed down the Association for Solidarity and Support for Students from Turkmenistan. The association was set up by Omruzak Umarkuliev, a student in his second year at the city’s Korkut Ata University. A year ago the young man was lured back to Turkmenistan on false pretenses and sentenced to a lengthy prison term. 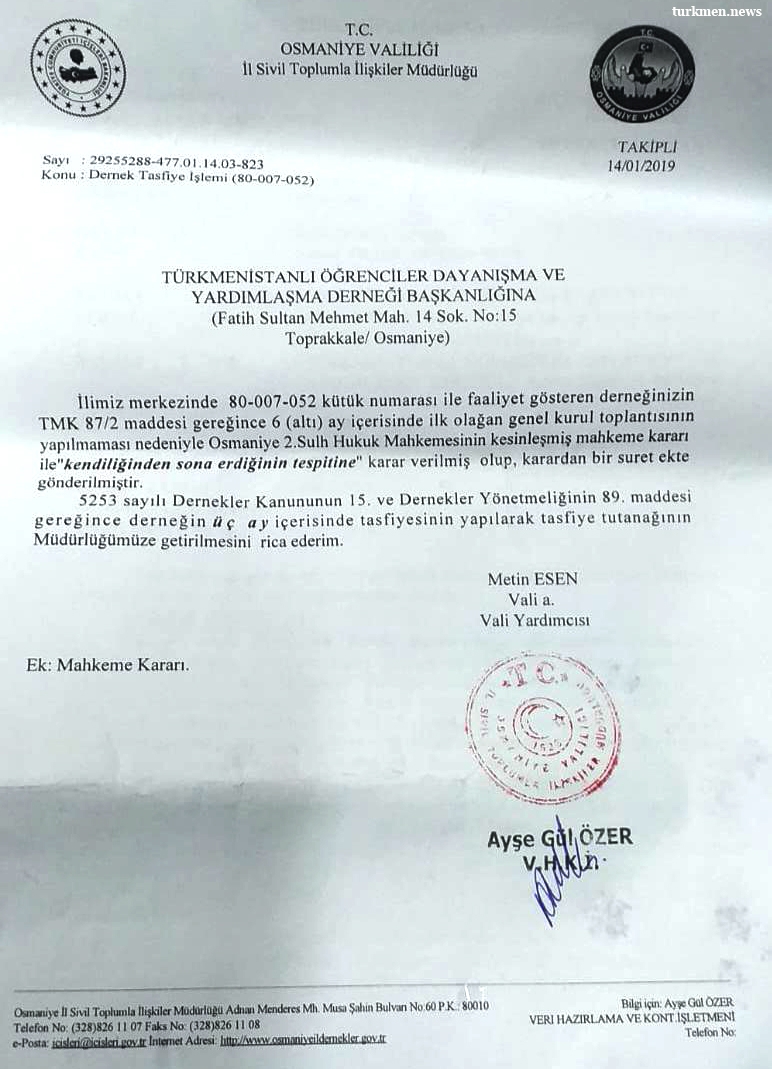 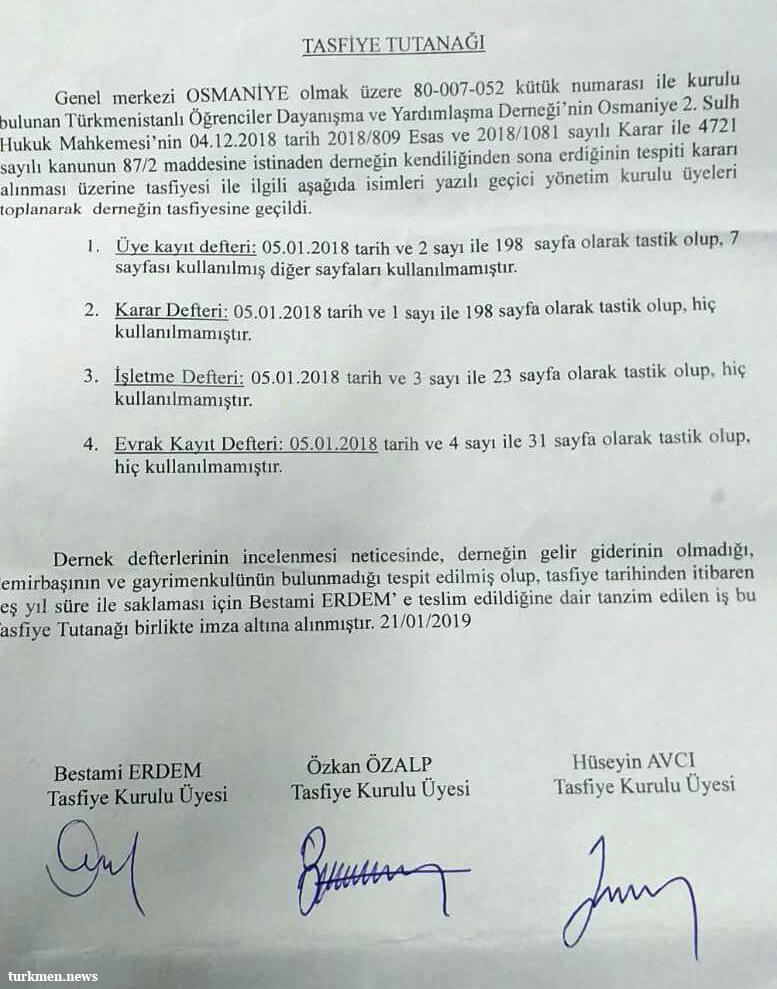 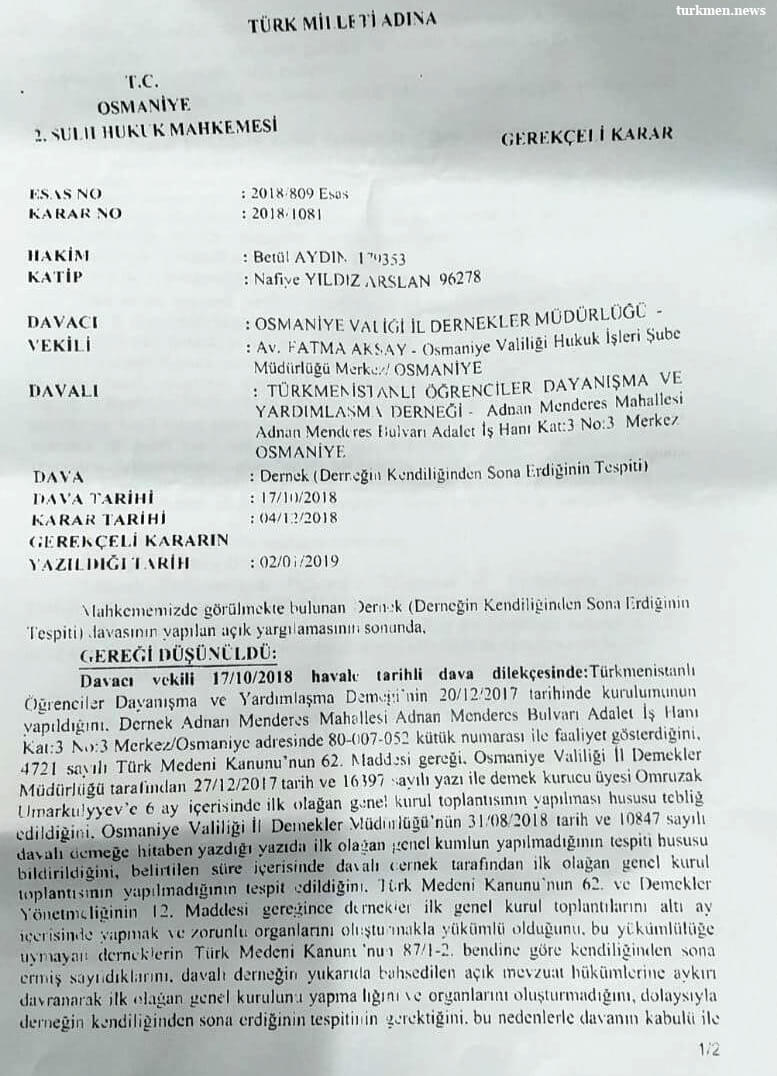 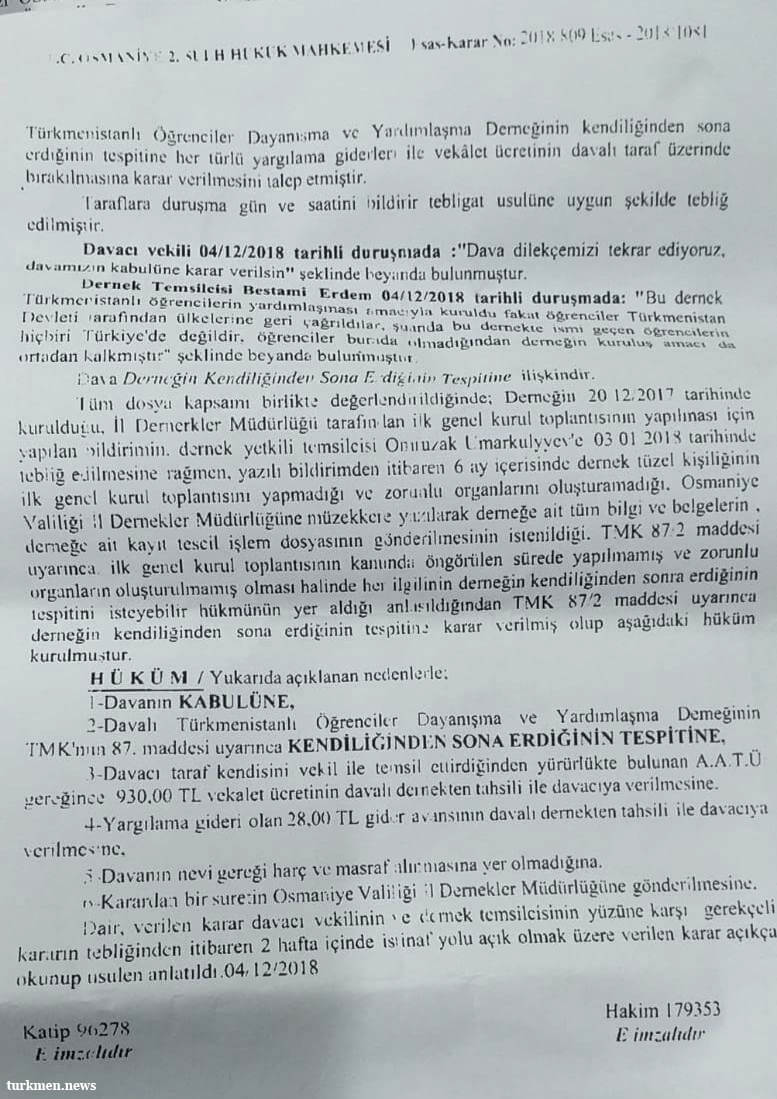 Turkmen.news has in its possession a copy of a letter from the Osmaniye mayor’s office, dated January 14, 2019, giving notification of a court decision. According to turkmen.news’ sources, the Turkmen embassy in Ankara had a hand in the closure of the association, even though officially it was shut down for breaking the legal requirement to hold regular meetings of the association’s founders.

“After they took Omruzak, Turkmen special service operatives, dressed in diplomats’ suits, did a huge amount of work to convince the city authorities, courts, and prosecutor’s office that the Turkmen students association was supposedly using the cover of mutual assistance to engage in politics,” a source familiar with the situation said.

He said that the diplomats quoted testimony from Omruzak, but goodness knows how it was obtained. Moreover, at every meeting with representatives of the Turkish authorities they emphasized that the association’s continuing activity, allegedly sponsored from Europe, would damage relations between the two countries.

Pressure was also brought to bear on one of the seven founders of the association—Turkish citizen Bestami Erdem. This elderly gentleman is the head of the confederation of Turkmen nomads who are thought to have migrated to the territory of modern-day Turkey some 200 years ago.

“He was told clearly: if you want to keep up relations with Turkmenistan in future, to maintain your cultural ties with your historic homeland, then you’ll close your association,” the source told turkmen.news.

In 2018 at the initiative of the Turkmen embassy in Turkey and the consul personally, Murad Akmamedov, Omruzak Umarkuliev was invited to take part in election events in Ashgabat. In February he flew to Turkmenistan together with Azat Jepparov (on the left of the photo), who is supposedly a representative of Turkmen students at the Turkmen consulate, but is in fact contracted to the Ministry of National Security.

The invitation to Ashgabat on the eve of the parliamentary elections was in fact a trap, designed to lure the young activist back to his country in order to bring him before a closed court and sentence him to a lengthy term. There is no reliable information about what he was sentenced for or for how long. Radio Azatlyk reports that Omruzak Umarkuliev has been sentenced to 20 years in prison.

Unable to bear what had happened to his son, Omruzak’s father Shirinbay Umarkuliev died in mid-May 2018 in Deynau district, Lebap region. The local authorities brought pressure to bear on the remaining members of his family. Omruzak’s mother Kyzlargul, a school history teacher, was not allowed to erect a stone on her husband’s grave showing his name and the dates of his birth and death. The people who talked to Kyzlargul did not introduce themselves. When she tried to object, she was threatened with reprisals, “Think about your daughters!”

Student Omruzak Umarkuliev is Flying to Turkmenistan. Lured There On False Pretences, He's Been Sentenced to a Lengthy Prison Term