Cheaper Foodstuffs on Sale in Ashgabat Ahead of Holidays

State run retail outlets in the Turkmen capital Ashgabat have started selling fruit at up to half the price charged in privately owned shops. The lower prices for both home-grown and imported produce coincide with two major holidays in Turkmenistan – International Women’s Day on March 8 and the spring new year Novruz on March 21.

Fresh, locally grown tomatoes have appeared for sale on the Ashgabat markets at 6 manats a kilo. Turkmen.news observers at one market saw a line immediately form for produce from the supplier Ter Önüm, as tomatoes cost between 9 and 12 manats a kilo in private shops.

Bananas have appeared for sale in state-owned shops at 8 manats and apples and oranges at 10 manats a kilo, sources in Ashgabat told turkmen.news. All this fruit seems fresh and recently imported.

Despite there being no limit on the purchase of tomatoes, vendors keep a careful eye on the people in line and refuse to sell to customers who are buying for the third time. Turkmen.news observers think they do this in order to prevent the subsequent resale to profiteers at a higher price.

Meanwhile, Turkmenistan also exports its homegrown tomatoes. According to figures from the publication Eksportery Rossii (Exporters of Russia), in 2018 Turkmenistan sent more than 5,000 tonnes of tomatoes to Russia, a 116% increase on the figure for 2017.

In recent years Turkmenistan has been experiencing a shortage of foodstuffs, especially imported food. Long lines form whenever produce appears on sale at “state prices.” Sugar, vegetable oil, flour, eggs and meat are all in short supply.

The images above were made in Ashgabat in recent days. Dozens of residents of the capital went to Teke Bazaar to buy subsidized bananas, pomegranates and other fruit. A .news correspondent saw several scuffles while standing in line for an hour. After one scuffle a vendor called a police patrol, who took the troublemaker away to the police department. His offence? Wanting to choose his own bananas.

A limited circle of Turkmen entrepreneurs purchase and import foodstuffs by order of the Ministry of Trade and Foreign Economic Relations. The entrepreneurs then get the opportunity to convert the manat proceeds into hard currency without following the usual restrictive procedures and quotas. 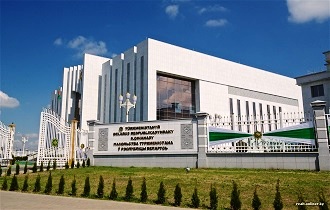