Turkmenistan’s state oil company Turkmennebit has yet to settle in full a debt incurred eight years ago. The state company signed a contract with Cypriot firm I.C. Intercomplect Ltd. in 2013 for the supply of a testing laboratory and mobile equipment for surveying and developing oil and gas wells. The equipment had to be custom built and Intercomplect ordered parts from various countries. The work was completed in May 2014. Turkmennebit signed the acceptance and delivery documentation and paid Intercomplect approximately 674,000 dollars. In August 2014 Tachdurdy Begjanov, the new chairman of Turkmennebit in place of Rejepgeldi Ilamanov, told the Cypriot firm that it was not possible at present to pay the remaining debt of more than eight million dollars “because of temporary difficulties.”

In March 2017 Dovletdurdy Hajiyev replaced Begjanov as head of Turkmennebit, but the new leader failed to remedy the situation. At this juncture I.C. Intercomplect Ltd. and the legal company CIS Debt Recovery Solutions, hired to resolve the dispute, decided to publicize the debt via turkmen.news. In 2018 Turkmennebit began to pay off their debt. Straight after this Intercomplect sent their specialists to Turkmenistan to commission the equipment, which had been standing idle for four years, and to train local staff.

In September 2018 a grateful Hajiyev gave the creditors written assurance that the state company “will meet all its payment obligations.” But another long silence followed. In April 2019 Hajiyev was dismissed “for failings in his work,” and Japarkuli Orazov was appointed “acting” head of the company. He was in the post for a while but only as acting chairman. Guychgeldi Baygeldiyev was appointed the next fully fledged head of Turkmennebit in February 2020.

At this juncture Intercomplect got in touch with turkmen.news again to tell us that they were still owed 3.5 million dollars.

The Cypriot businessmen have given us copies of the many letters they have sent to Turkmenistan in recent years. In July 2020 Intercomplect outlined the history of the dispute in a letter to Baygeldiyev. The letter notes that the new chairman of Turkmennebit had promised to settle the debt, but not given any specific timeframe.

“We have been talking to Turkmennebit about payment of the debt for more than six years,” the suppliers say. “There have been four heads of the company during this time. You are the fifth leader in the history of this contract. Each of your predecessors wrote letters to us with the same content. Very polite, but saying nothing specific.”

The company recalls that after Turkmennebit began to pay its debt, Intercomplect commissioned all the equipment and made additional deliveries of spare parts and accessories free of charge. The company hoped that Turkmennebit would “see these as goodwill gestures and the company would want to pay their debt.” Their hopes were not met though.

Over the years the chairmen of Turkmennebit have used various pretexts in order to delay payment. They include references to Turkmenistan’s tough economic situation – language that is never seen in the official Turkmen media! The state company’s managers verbally asked the suppliers to wait until the end of the 2017 Asian Games and then to let the Turkmen economy recover a little after all this expenditure. They referred later to the fall in the oil price (but did not mention its subsequent increase). Finally, Turkmennebit began to refer to the world economic “coronavirus” crisis.

The numerous letters to Baygeldiyev produced no result. In April 2021 Intercomplect sent a letter to Vice President Charymyrat Amanov, asking him to inform President Gurbanguly Berdimuhamedov about the debt.

At this time Turkmenistan’s leadership was calling for increased attention to development of the oil and gas sector, including attracting international investors more widely, and developing cooperation with foreign companies to bring the latest technology into the sector. Intercomplect had provided and commissioned exactly this type of modern, efficient mobile equipment. Even this circumstance failed to encourage Turkmennebit to pay off the debt.

Now Berdimuhamedov himself has announced his intention to step down. The country is preparing for elections in March at which power should be handed to the president’s son Serdar Berdimuhamedov. It looks as though the story of Turkmennebit’s debt is going to drag on for a decade and form part of the legacy passed on to the country’s third president.

It might be assumed that the reason for this behavior by the Turkmennebit leadership and Turkmen officials is an objective lack of money. Despite official reports on the dazzling state of the Turkmen economy, the country has been going through a deep crisis for some time. Intercomplect does not accept this interpretation, however. The company points out that whatever the state of the economy, the sum is not that large in terms of the state budget or a major state concern. But for a company like Intercomplect the sum is critical. The debt has practically brought the company’s work to a standstill.

In recent years Turkmenistan has held the aforementioned Asian Games, reported on the commissioning of many “great construction projects”, and carried out a large number of other projects. So why does the state think it possible “to forget” its obligations (debts) under commercial contracts?

The Cypriot company is resolved to obtain payment of the outstanding 3.5 million dollars in full. It is also intent on broadcasting what has happened far and wide, so that other foreign companies understand the risks involved in working with the Turkmen state sector. 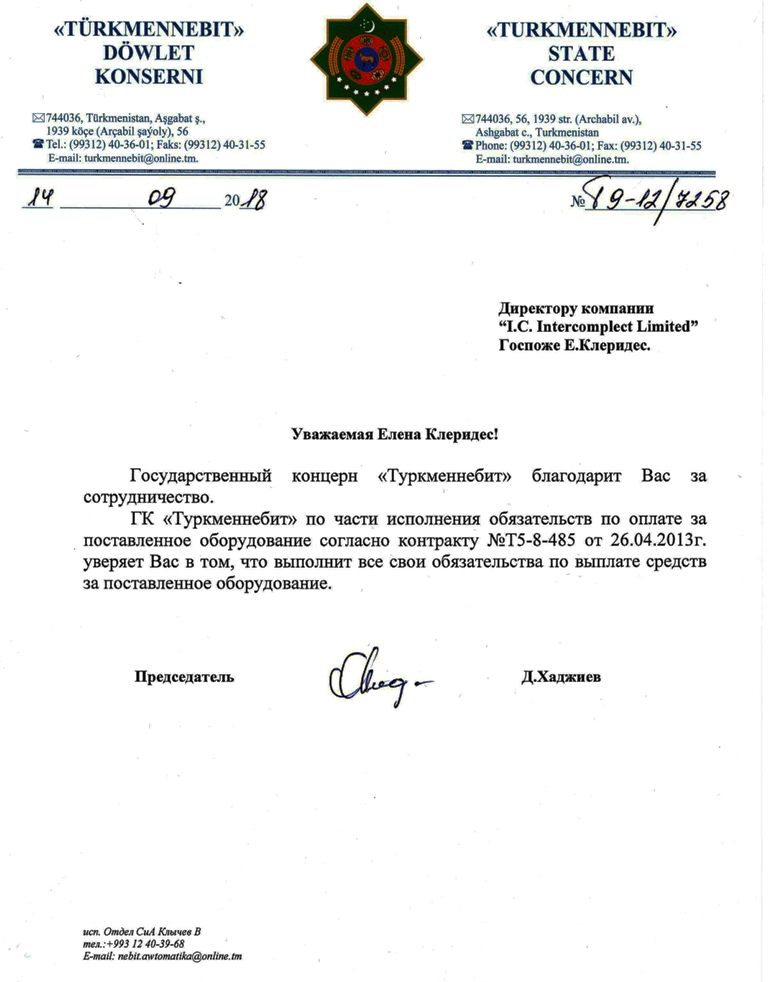