Students from Turkmenistan studying at the Belarusian State Economic University have a total debt of $3,550 to the university dormitory, according to documents obtained by turkmen.news. This debt is just for August 2019. Of 102 foreign students on a list of debtors submitted by the dormitory to the university administration 97 are citizens of Turkmenistan. 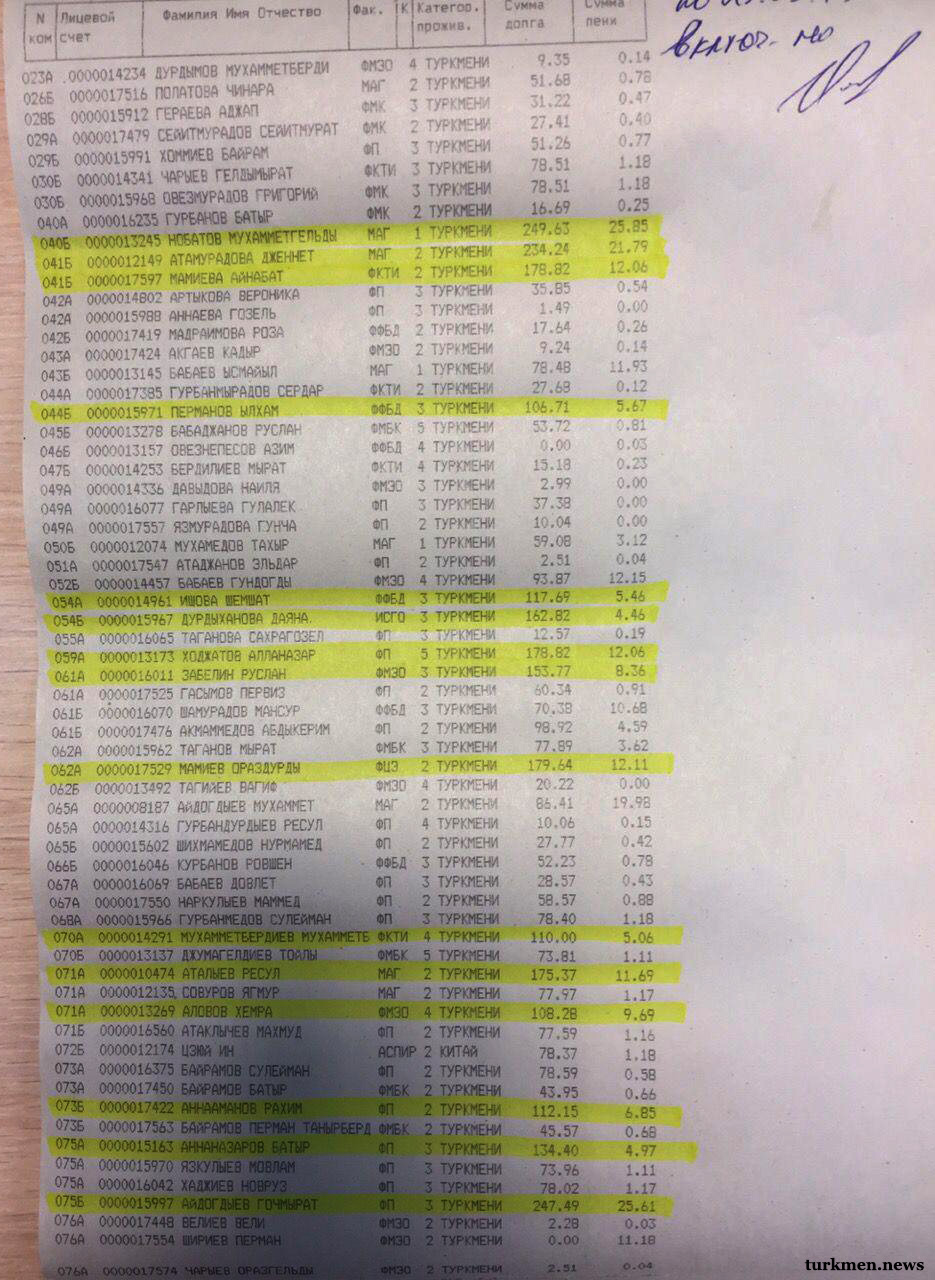 Sources says the debt for September is expected to be lower, as the majority of students have just come back from home after the summer vacation with money in their pockets. But problems will start to grow in October. According to the university’s regulations, payment must be made for the dorms a month in advance. Only if this is done will the university extend foreign registration. If debts are not paid in the near future, the students will face eviction and, subsequently, expulsion. This was the blunt message given to the Turkmen contingent at a recent gathering with foreign students.

“We are still having the same problems with money and bank cards,” a student in Minsk said. “At present ATMs give out just 30 roubles [$15] in a single transaction. In September the ATMs gave slightly more – 40-45 roubles – because of the fall in the dollar rate in Belarus, and there’s no card payment at all in the shops.”

He said that he and many of his fellow students are ashamed to stand in the dean’s office or before the management of the dorms, looking at their shoes as they listen to a lecture on the need to pay their bills.

“You explain to them that there’s enough money on the card: look, here it is! It’s not our fault that the government of our rich country has put us in this position,” the student said.

Turkmen.news reported in detail at the end of September about problems converting manats onto hard currency cards and transferring funds to pay tuition fees. According to a source in Ashgabat, after a client has submitted all their documents and paid the sum to be transferred, they are given two receipts in A4 format and told to wait for approval. If the go-ahead is given, in approximately a week’s time the client has to return to the bank and get the receipts stamped. The money transfer from Turkmenistan to the university’s account in Belarus takes around a month.

“Money arrives more quickly from even the most backward African country than from Turkmenistan,” the source says. The universities demand this stamped receipt from the bank confirming payment for tuition, but it takes the money a long time to arrive and, eventually, the university administration calls the student on the carpet. And then the shame and embarrassment start all over again for our students.

Two currency exchange rates have been operating in Turkmenistan for several years: the state rate (which hasn’t changed since 2015 and stands at 3.5 manats to the dollar) and the market rate (around 18 manats to the dollar). Restricted categories of the population convert manats to dollars at the state rate: students studying abroad (at present not more than $12,000 a year can be transferred or placed on a student’s hard currency card), people travelling abroad for medical treatment on the recommendation of local doctors, and some businessmen who import basic foodstuffs.

Turkmenistan has faced a severe financial crisis since late 2014 – early 2015, caused by a fall in income from oil and gas exports and the spending of billions of dollars on lavish construction projects.

In all, some 8,000 students from Turkmenistan are receiving their higher education in Belarus.

﻿Turkmen Students in Belarus: Good at Dancing, Not Studying

Turkmen Struggle to Access their Money as Economic Crisis Bites