“Get me out of here or they’ll kill me!” Colleagues Link Policeman’s Death to WHO Visit to Turkmenistan

When Major Sapa Gurbangulyev of Vekilbazar district police, Mary region, felt unwell in the middle of the day at the end of June, neither his colleagues nor his family imagined he had just days left to live. The major’s temperature suddenly shot up while he was at work. An ambulance was called but the paramedic didn’t spot anything serious and took him home.

Maj. Gurbangulyev, 51, spent a few days at home. His condition was up and down: he would have a temperature for a couple of days, then it would go back to normal, and he would feel better. In the end, he was taken to the regional infectious diseases hospital in Mary, where for a week his only complaint to his family was a high temperature. He didn’t lose his sense of smell or taste (typical symptoms of COVID-19) and could talk and walk unaided. The major’s heart was fine too.

A week later his family received worrying news: fluid had been found in Maj. Gurbangulyev’s lungs. They were not over anxious, however, as they knew that fluid on the lungs is not critical these days and in the worst case scenario can be drained. Moreover, the major still didn’t feel too bad. He could still walk and talk and wasn’t so weak that he had to lie in bed all day.

A couple of days later the major suddenly started to struggle to breathe. The regional hospital didn’t have an oxygen cart, but they managed to get hold of one privately. The orderlies suddenly arrived and said they had to take the patient to the infectious diseases hospital in Yoloten. According to sources, the major’s relatives still blame themselves for agreeing to the transfer, though they might not have been able to stop the move.

On Friday July 3, Maj. Gurbangulyev said some strange things in a telephone conversation with his wife. He said that he wasn’t given oxygen and that his life was in danger. He asked his wife to get him out of there as soon as possible. She tried to get into the Yoloten hospital building, but wasn’t allowed beyond the gates because of quarantine rules. When he heard, the major said agitatedly, “Then they’ll give me an injection now and kill me!” Half an hour later hospital staff came out to tell her the major had died.

His family and colleagues have still not been able to find out what happened in the infectious diseases hospital in that half hour. Perhaps the major, gasping for breath, panicked, realizing he was not going to get the necessary help. Or perhaps he heard the doctors talking and this gave him a scare. But nobody knows for sure. Those close to the Gurbangulyev family are puzzling over the question: what injection was the major referring to in the conversation with his wife, and why was he so afraid of it?

Rumors are rife in Turkmenistan at the moment about mysterious injections as a result of which suspected COVID-19 patients are dying. It might be because of unsuitable medicines or a combination of incompatible drugs or serious side effects, which exacerbate the patient’s condition. Turkmen.news reported about this possibility recently.

Sapa Gurbangulyev’s colleagues remember that when he was in the regional hospital he was given injections of analgin and dimedrol before he had received a diagnosis. The major’s colleagues think this could have worsened his condition.

Backgrounder: analgin and dimedrol are a classic formula to treat pneumonia. But the use of non-steroidal anti-inflammatories (which includes analgin) in COVID-19 cases is contentious. Negative side effects of this medicine were reported at the start of the pandemic, then later the data was supposedly rejected, but paracetamol is still the preferred medicine to bring down temperature in COVID-19 cases. Turkmen.news could not find any reference anywhere to the formula “analgin and dimedrol” for the treatment of coronavirus infection. Around the world doctors are taking a different path. Pneumonia with coronavirus is quite specific and is not the same as “common” inflammation of the lungs.

The major’s body was given to his family early the next morning, on Saturday, July 4, after his widow had pleaded with the authorities for a long time. People in protective clothing brought the body in a plastic wrapper and showed the dead man’s face for just two seconds, telling his family not to open the wrapper until the test results. They got the results at seven in the morning on Saturday.

Gurbangulyev was given a diagnosis only after his death. Inflammation of the lungs was written as the cause of death. No test result was given, but since the family was allowed to open the wrapper and wash the body according to tradition, this implies that the major did not have COVID-19.

Some of his colleagues have their own opinion about this.

Maj. Gurbangulyev’s was not an isolated case at that time – other patients died in similar circumstances in July and the rumor about a terrible injection did not come out of nowhere. All these deaths coincided with the visit of WHO experts to Turkmenistan. Several days before their arrival, on July 6, patients with obvious symptoms of coronavirus infection were hastily removed from hospitals and taken to remote medical facilities. The major must have been suspected of having COVID, otherwise it’s hard to explain his hurried transfer to Yoloten infectious diseases hospital, and his desperate attempt to get out of there. The foreign visitors could not be allowed to find the showcase medical facilities overflowing with patients. They got rid of the “excess” by moving them further away from the center, or could they even have done it by injection?

“It’s the arrival of the WHO that can explain all this,” a colleague of the dead man said on condition of anonymity. “So, his rapid demise now makes sense. It means that he and other citizens paid with their lives to convince the WHO mission that the country had no infections with the fatal disease.”

So, what of the experts? What do they have to say? According to well established tradition, they did not break the practice of polite interactions with the Turkmen authorities to express their doubts about the reliability of the information they had been given. True, after the mission’s departure the authorities stepped up quarantine measures. They instructed the population to wear masks in public places to protect themselves from “harmful dust” in the air. But this won’t bring back Maj. Gurbangulyev, 51, father of three children.

His colleagues and family are in the dark as to what was in the injection that he feared so much half an hour before his death and why he passed away so quickly. They may well write complaints about the doctors, but these are unlikely to be upheld. Even if one of the medics were punished, this could not be seen as a success. Doctors in Turkmenistan are put in a position in which they simply cannot avoid doing many things that in other countries would be considered criminal. However, even in these conditions doctors manage to save people’s lives, for which their patients are very grateful. 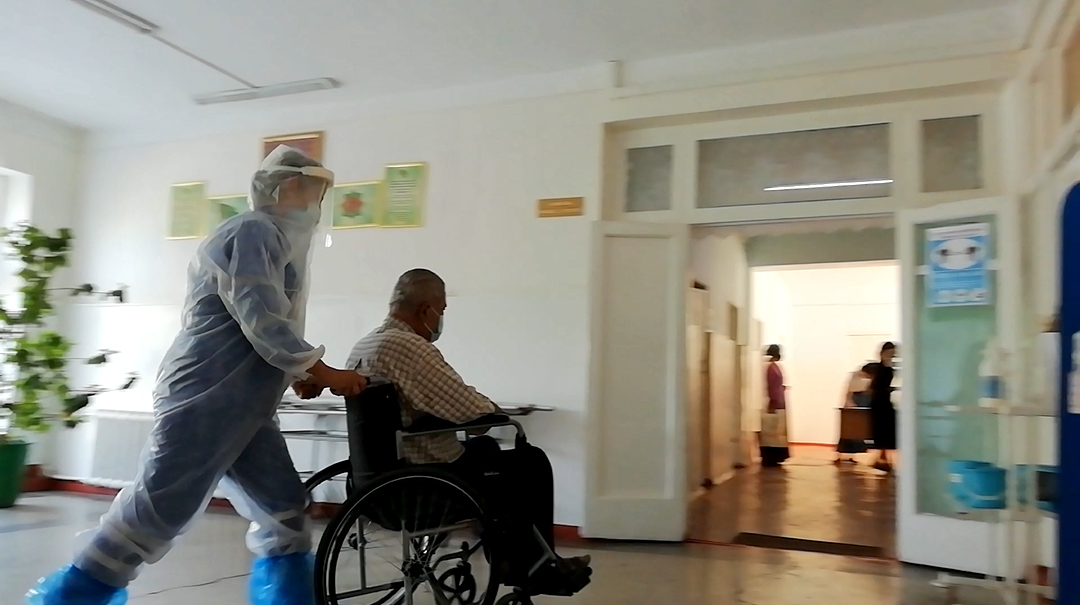 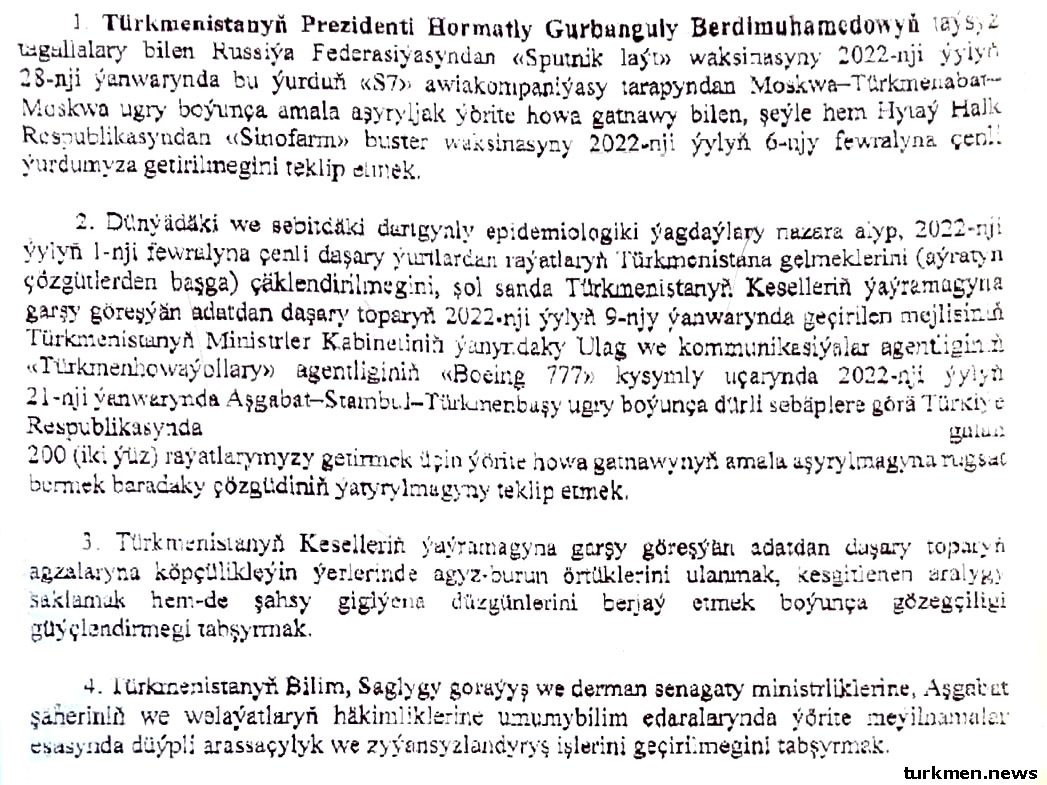