Beggars have appeared all over Turkmenistan in recent years. Men, women, and children with hands outstretched are an everyday sight at markets, bus stations, and car parks. Others do the rounds of state institutions and private companies, or ask for money for medicine in hospitals and clinics. People support them as best they can, especially if children are involved.

Meanwhile, state media continue to report a general increase in incomes and standard of living; they’ve enthused for a whole year over the president’s decree increasing wages, pensions, and benefits by 10%. There’s no mention that the real value of the manat is falling far below the percentage increases.

A hard life is no respecter of ethnicity. Until recently shame prevented people from begging or rummaging through dumpsters, but now desperation trumps these fears. Poverty is affecting the whole country – Turkmen in Ashgabat, Baluch in Mary, and Uzbeks in Dashoguz.

In the center of the western city of Balkanabat, for example, several people take turns begging at the entrance to the Market of Plenty, as it’s called in Turkmen. A middle-aged woman in a long dress and Turkmen headscarf stands with her hands outstretched, as though about to pray. At other times a Russian babushka stands here. People hurry past them: some open their purses, take out a small note, and stuff it in the woman’s hands; others look away and walk on by, as though they haven’t noticed.

There are dozens if not hundreds of people begging in Balkanabat. Some walk along the rows of market stalls, some knock on people’s doors, while others enter train carriages just before departure, and loudly recite a prayer, asking Hazrat Dawud to grant the passengers a safe journey, as everyone travelling on public transport in Turkmenistan venerates him. People don’t begrudge a manat or two, as belief is strong in this mythical guardian.

But what is driving people to beg? First of all, it’s the lack of social protection and small pensions and benefits. The most vulnerable are pensioners and lone mothers bringing up their children without paternal support. While divorce used to be condemned by Turkmen society, if not considered an outright disgrace, now it is no longer a rarity for an errant husband to abandon his children. It’s often pointless to go to court for alimony as the ex-husband has no job, so cannot pay. Women in this position are in the grip of poverty.

Arzygul from Balkanabat is just 40, but looks more like 50. Her husband has left her and their three children to fend for themselves. Arzygul has never worked and her school certificate is her only qualification. She is partially deaf and the family gets by on her pension for the third category of disability – 352 manats (around $20) a month.

“One can’t survive on that now. Prices are going up for everything, so we buy only bread and pasta. I add a stock cube to make soup for the children,” she says.

Every day she walks round the neighborhoods of Balkanabat, knocking on apartment doors, and on Fridays she begs near the mosque. Someone will give her one manat, someone else five and even 10. Arzygul says that many people know her by now and try to help if they can, but there are fewer and fewer benefactors.

She always carries a small saucepan and lid in her faded carrier bag in case someone in the apartments is giving out food as sadaka in thanks for a recovery from illness, return from the army or a birth, or to remember the dead. When there’s sadaka, she gets a large spoonful of fresh pilaf or a portion of dograma (small pieces of bread in a meat bouillon), or bread and several bogursaks (doughnuts).

A friend advised Arzygul to get alimony from her ex-husband. She has been getting together her documents since the start of the year. In January she went to her housing office to obtain a certificate on her family status. She was asked to pay the annual housing fee of 208 manats ($11.5) for her 30-meter apartment. She had no alternative and had to pay. But she was shocked when she went back in March to correct a mistake in the certificate and found out that the fee had been increased – she had to pay another 177 manats (around $10).

“I don’t have that kind of money at the moment,” Arzygul said. “It’s 385 manats all together which is more than my pension – I won’t be able to afford food for the children.” The process of getting together her documents to apply for alimony has ground to a halt.

Right after the International Women’s Day holiday on March 8 I had to go by train from Ashgabat to Mary. Two women were chatting on the folding seats in the sleeper carriage corridor. I listened in to their conversation.

“Hooray,” the older woman said, “they’ve added another 20 for the holiday! It was 40 and now it’s 60! It would be great if they did that every year!” The younger woman sighed, “Those 60 manats have made you rich, have they? Prices are crazy, housing costs are going up. We can’t afford to privatize our apartment, our wages aren’t enough, and we just can’t get that kind of money any more.” “Yes,” the other woman agreed, “and you won’t have much of a life on a pension. There’s hardly enough to get by, but we’re still glad to have that 20.”

I joined in, saying that one could now see lots of poor people in Balkanabat from all ethnic groups, but mostly old people, pensioners. What do you expect, one of the women said. Pensions vary and some people only get 300 to 400 manats a month. How can you survive on that? So, many people go through the garbage in the hope of finding something to help them get by.

In Mary I discussed the subject with my former groupmate Meylis who had invited me round for lunch. He told me about his neighbor, whom he had seen on the way home rummaging through the garbage, taking something or other out and putting it in a large bucket.

“He lives in the next block,” Meylis said. “I often seen him at different sadaka occasions, but I didn’t know he was so poor he had to go round the dumpsters! The children saw him collecting scraps of food, probably for cattle, because if people are now eating from the garbage, Turkmenistan really has problems!”

Meylis said that many of the townspeople were no longer embarrassed to look for plastic or glass bottles in the garbage. And what’s embarrassment when your children’s survival is at stake. People pick out expired medicines, old clothes and shoes, and any spare parts for electronics and sell them to TV repair shops. I found out about that on my previous trip to Mary. On the other hand, the majority of people rifling through dumpsters are heavy drinkers, who don’t have a roof over their heads or who’ve been thrown out by their families.

It was getting dark when I made my way back from Meylis’s house. Not far from his building a man was rummaging in a garbage container. The peak of his cap obscured his face. I stopped, but the man wasn’t interested in the passer by and continued his methodical search of the container. It might have been my friend’s neighbor again, or perhaps someone else.

I saw a similar sight later in Ashgabat: two people, probably father and son, were working a neat row of garbage cans. They looked in every container, picking things out and putting them in their carrier bags. The young man was carrying a heavy rucksack. If one hung around for 30 or 40 minutes, one would see at least three or four people or groups rifling through the garbage.

This is all on the edge of the city, in the residential areas, far from the glossy white marble façades downtown, which astonish the few foreign visitors. The two worlds never meet, and the reality gets tougher with every passing year.

Turkmen.news has changed the names of all its interviewees to protect their identity 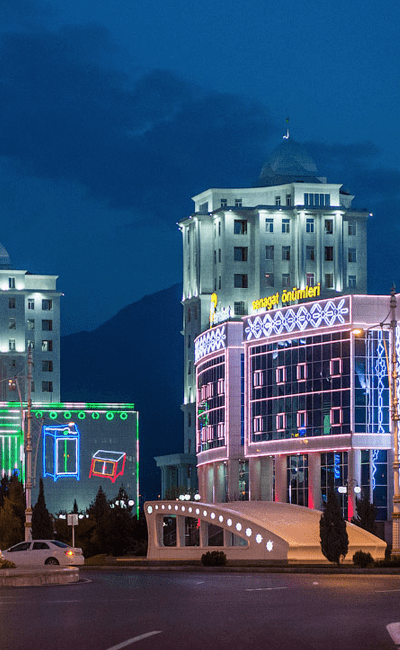