YouTube blogger Murat Ovezov was sentenced to five years’ detention in summer 2020 after he wrote a poem about coronavirus quarantine entitled The Bitter Truth. Ovezov, 48, was convicted of “Fraud” under Article 228 of the Turkmenistan Criminal Code, but turkmen.news sources in Dashoguz region say his remarks on YouTube were the real reason for the case.

A resident of Gubadag district, Dashoguz region, Ovezov registered with YouTube in 2017, but did not post any videos until 2020. Some of his clips concern his work for the firm APL, which sells cosmetics and dietary supplements via multilevel marketing. But in other posts the blogger is very outspoken by Turkmenistan’s standards.

In his first video of June 12, 2020 Ovezov talked about the pandemic and the closing of borders. He read out his poem on the subject, The Bitter Truth. (An English translation can be found at the end of this report.) The poem laments the plight of the thousands of labor migrants who were stranded abroad when Turkmenistan closed its borders because of the virus. It also refers to the grief of mothers unable to bury their dead in Turkmenistan. (There was no way to repatriate the bodies of those who had died abroad.)

A month later Ovezov seems to have had his first contact with the National Security Ministry. On July 11, he posted two clips, “I don’t want to believe it” and “I didn’t break the law”, but later removed them.

On July 15, the blogger posted a video to explain his actions: “I said something that wasn’t true in the last clip. I said that my WiFi had been cut off and that I suspected the National Security Ministry was behind it. But I don’t have proof of this. If you accuse anyone without proof, you are breaking the law. So I took down the clip. I hope I will be on air more often. Dear viewers, look after yourselves! State TV is also recommending face masks, so if you go to any crowded places or are standing in queues, keep a distance of 1.5-2 meters apart.”

Several more outspoken videos appeared on his channel. In a clip on July 16, 2020 Ovezov spoke in detail about the difficulties of Internet access in Turkmenistan. He said that in 2011-2012 he had had to climb onto the roof of his house to get a signal. Only in 2016 did he and his fellow villagers manage to get a WiFi cable laid to their village. But at that time YouTube, Facebook and Russian social networking site Odnoklassniki were not yet blocked.

“Then they started to stifle the Internet: they reduced the speed, blocked the signal,” Ovezov recalled. “In 2017 I opened my YouTube channel, but could not upload my first clip because of the slow Internet speed.”

He said that Turkmentelecom would eventually send an engineer to his home supposedly to sort out the problem, but there was never any improvement. He managed to get a more or less acceptable speed only after connecting to a VPN (virtual private network). But VPN services were later blocked and anyone who used a VPN had their WiFi cut off.

In a video on August 2, 2020 Ovezov talked about quarantine measures. He said that since March travellers by road had had their temperature taken and that everyone in taxis wore masks. He said he had attended the funeral of a 72-year-old woman who officially had died from low blood pressure, but hardly anybody there had worn a mask.

Despite his problems with the Internet Ovezov tried to do online marketing. He worked with a company called APL, which according to Russian publication Pravda PFO was set up by a Russian citizen, Sergey Kulikov. Similar to the multinational company Oriflame, APL sells cosmetics via a network of distributors in different countries. Its main product, however, is “miracle candies.” Ovezov probably did not sell these lozenges, though, as Turkmenistan has banned the import of dietary supplements. There is no sign that Ovezov managed to get round the ban. His main role seems to have been advertising APL products to Turkmen citizens living abroad, which he does in one of his YouTube clips. He does not appear to have made much money from his ventures and has only 385 subscribers to his YouTube channel, which is extremely low for online marketing. Ovezov also recommended folk remedies on his channel, which he did not do for commercial gain.

It is highly unlikely that Ovezov was arrested for promoting APL’s products, as Internet services in Turkmenistan are full of advertisements for fortune-tellers, mind-readers and other dubious services.

Turkmen.news sources report that Ovezov’s outspokenness was the reason for the criminal case against him. The last straw was a clip in which he spoke again about COVID and also about lines in shops. Turkmen.news has not been able to find this video. It was probably taken down, like the clips of July 11, 2020, but this time Murat Ovezov did not get off with simply publishing a denial.

Turkmen citizens who speak too openly about the situation in the country regularly end up in prison on fabricated charges. Turkmenistan’s special services frequently use the flexible charge of “Fraud.” In the case of Nurgeldi Halykov it covered the failure to repay a non-existent debt and in the case of Hursanay Ismatullaeva it covered a small payment for providing services as a carer.

Below is a translation of Murat Ovezov’s poem The Bitter Truth, which he recites in Turkmen in a clip uploaded to YouTube on June 12, 2020.

It’s a bitter truth, unpalatable.
What can you do?
There’s no way out. I had to write.

I had to set down in verse
What is on my heart.
The whole world is in quarantine.
It’s the reason why bodies remain in alien lands,
Where many graves are dug.

Mothers have to weep for them at home.
The nation’s heart is pierced,
Its compatriots abandoned abroad.
Fellow countrymen, you left your children
And travelled far away.

The sorrow of separation is crushing them.
May the Almighty protect all of you who are there, my brothers.
Your children miss a parent’s tender touch.
You are too many to count.

The virus has shaken this world,
But be patient – these days will pass.
A remedy will be found.
The virus will not take our fortress.
The world will soon open its roads. 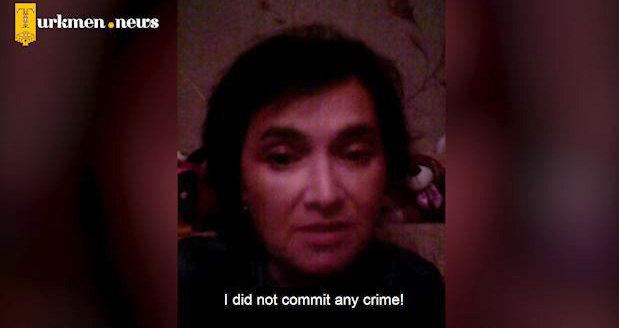