A row over the construction of a potash fertilizer plant in Turkmenistan appears to have stepped up a notch with the Turkmen side withholding the contractor’s equipment.

The Garlyk mining and processing plant in the east of Turkmenistan, built by Belarusian state-owned company Belgorhimprom, was accepted by the Turkmen side and officially opened in March 2017. The presidents of Belarus and Turkmenistan even attended the grand opening ceremony.

The project has been dogged by disputes, however. Turkmen.news has learned that the Turkmen side is withholding Belgorhimprom’s property. The property includes construction equipment – tipper trucks, bulldozers and mobile cranes – worth some seven million dollars in total. All the equipment was imported into the country temporarily and should have been exported on completion of the construction work. It’s almost two years since the plant came into operation, but Turkmenistan is not allowing the Belarusians to take out their equipment, saying that Belgorhimprom has not met its contractual obligations.

The Turkmen position as to why they have effectively seized the equipment is vague and inconsistent. Initially, the Turkmen simply prohibited the removal of the equipment without giving any reasons. Then they said that the retention of the equipment was a measure aimed at preventing “possible attempts at unauthorized removal of state property,” despite the property in question, including construction equipment imported into Turkmenistan on a temporary basis, belonging to Belgorhimprom.

The Garlyk potash fertilizer plant has been fully accepted by the Turkmen side and the act of acceptance bears the signatures of numerous Turkmen officials, .news sources say. The document confirms that the plant was built in accordance with applicable requirements. The Belarusian side has received no documentation about faults.

It was reported earlier that the client – the Turkmenhimiya state concern – has an unpaid debt of more than $150 million to Belgorhimprom. The Turkmen side is, moreover, refusing to invite Belgorhimprom staff to Turkmenistan.

Turkmen.news has learned that in December 2018 the plant’s actual output for production of potash fertilizer was 32,000 tonnes. This is around 2.3% of the design production capacity of 1.4 million tonnes. Although specialists say that plants of this type do not reach design capacity from the moment they become operational, 32,000 tonnes is still low. It is understood that Belgorhimprom believes that the low production is also caused by the fact that the Turkmen do not have the skills to commission the plant correctly and its own staff are not allowed on site.

Turkmenistan is exporting some of the fertilizer to Iran.

In late 2014-early 2015 Turkmenistan suffered an acute financial crisis following a fall in income for hydrocarbon exports and the authorities’ expenditure of billions of dollars on holding various sports tournaments and on constructing not wholly viable facilities.
As a result, major state concerns were left in debt to foreign suppliers and contractors. In other situations, state concerns have failed to settle debts of less than 2.5 million dollars, which should be insignificant for such giants as Turkmengaz and bit.
Some foreign companies left Turkmenistan and are now trying to get their money back through international courts. Turkmen companies, however, are forced by the authorities to give up their financial claims. 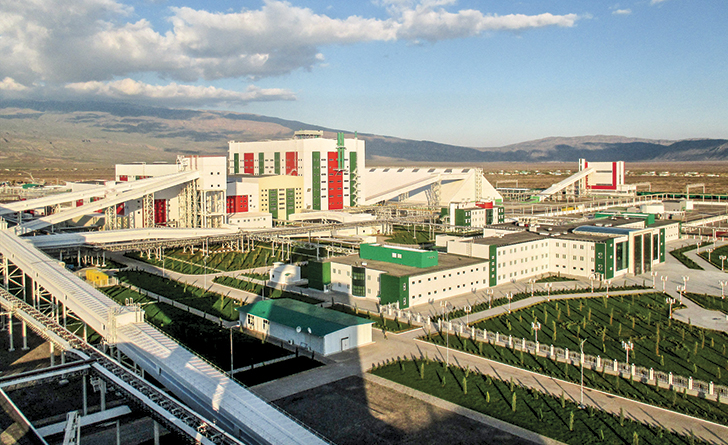